I posted a laundry list of hypocritical carryings-on by so called “moral leaders” a couple weeks ago, but it neglected to include one of America’s most notable rabid right-wing morality and family values blabbermouths: “Doctor” Laura Schlessinger!

For those who don’t know, “Doctor” Laura Schlessinger is an almost unbelievably reprehensible pile of shit who browbeats, insults and berates the sub-normals who call in to her radio talk show for advice and “moral guidance.”

Judging by the questions people ask, you might believe that “Doctor” Laura is a Psycologist, or a family therapist, but no, her doctorate is in physiology. The dictionary says that physiology is, “The biological study of the functions of living organisms and their parts.”

Which is all well and good if you are giving advice on endocrinology or metabolism, but I’m not sure it’s relevant when your job is to make the vast majority of women feel like worthless whores for three hours a day on a nationally syndicated radio show.

The funny thing about the holier-than-you-could-ever-dream-of-being Schlessinger, is that she has done just about everything she rails against as immoral and damaging to society at large. Abortion, adultery, excessive drug and alcohol use – all water under the bridge for the author of such books as How Could You Do That? and Ten Stupid Things Women Do To Mess Up Their Lives.

The fascinating tidbits never end. Her young son burned down their house in a bid for attention. She refuses speak to her sister. Her mother was dead, alone in a small apartment, for a month before anyone noticed. This is the woman that millions of people turn to for advice in dealing with their families.

Before you think that this is all fabricated anti-Schlessinger propaganda, consider the interesting case of one of her adulterous lovers who documented their relationship with a series of nude photos. Schlessinger was 28 years old when the pictures were taken – hardly an innocent child.

The man who took them, Bill Ballance, was a Los Angeles talk radio host, who maintains that Schlessinger had sex with him to further her career (Ballance is 29 years older than Schlessinger). At the time the pictures were taken, and during their sexual relationship, both were married.

According to Schlessinger – who after repeatedly denying the existence of the pictures, finally admitted that they were genuine – she regrets having posed for them, and says, “people change.” But try calling her talk show and asking her if you should stick with someone who is less than perfect in hopes that they will change…you let me know what she says about the possibility of change then.

I present these pictures here to aid, in any small way that I can, with the embarrassment and ridicule of the evil “Doctor” Laura Schlessinger. I don’t believe in hell or the devil, but if I’m wrong, Schlessinger is certainly one of the devil’s top bitches. All you have to do is look into her squinty, judgmental eyes…well, they aren’t squinty and judgmental in these pictures…but she was probably stoned… 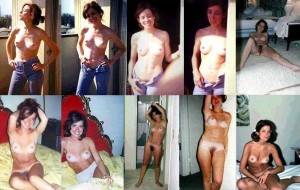 I know this is old news and no one really cares, but I heard her on the radio today and she said something so absurdly retarded that I had to post this.