I needed 50 interesting old can or bottle labels for a book project, so I checked eBay. I didn’t think I’d be able to find 50 of the same thing, but lo and behold, eBay came through again, giving me dozens of choices of weird old labels with at least 50 copies of each.

Now that’s great for me, but it begs the question, who the hell else is buying 50 copies of an old can label?! Lots of people, as it turns out. But I cannot, in my most warped and loopy imagination, understand why.

We certainly collect a lot of weird shit, there’s no denying that. Beer cans, civil war bullets, old radios, HotWheels cars, plates with shit printed on them…it’s really a never ending list. But I will admit that I was surprised to learn that there were label collectors.

On one hand, I’m glad the human race can still surprise me, but on the other, given the sheer volume of idiotic pastimes that we engage in and the pointless shit we amass, I don’t hold out much hope for our ultimate survival.

What the hell is the average person going to do with 50 tomato can labels anyway? “Bob, look at this…very rare, very rare, and I have fifty of them!” I suppose I should thank nuts like that for saving those labels for me for the last several decades.

Worse than that, I’ve recently learned that there are people who collect old lead type used for letterpress. They don’t use it. they just buy it and – and I don’t know what. Look at it in a box? Hand it to someone and laugh, “It’s heavy, ain’t it! Har har! Heavier than it looks, huh? Woo hoo!”

The problem with that is there are some of us who actually want to use it, and when a “collector” buys a rare old typeface, it’s out of circulation until he kicks the bucket. At which point his wife will likely throw it all into a dumpster with his old pants and Field and Stream magazines. Not to mention the fact that these fruitcakes have driven prices to ridiculous levels. 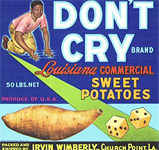 I know what some of you are thinking, “Hey, you ruin old books to make crappy art!” and, okay, you aren’t completely wrong. I do ruin them (and it is crappy art), but I do not ruin anything desirable or valuable. I only pay a few dollars for the old books, and they are usually pretty fucked up when I get them.

And the labels I’m buying – those are going to get fucked up too. So I guess I’m guilty of doing exactly what I’m complaining about. Which is probably why it makes me so mad, because none of us likes seeing our own faults on display in others. A filthy trick of the human psyche! We will be so much better off when we’re all robots in the year 2000…