Yes, it’s true — I have finally received the mythical Peace Card set, a letterpress project that started well over three years ago.

I sent off my contribution in October of 2002, and as you may have read around here somewhere, waiting turned to disbelief, frustration, anger — all of those groovy emotions that make life worth living

Dealing with a compulsive liar is as interesting as it is maddening, but I won’t go into that here. I had this therapist who told me to look for the good in situations such as these when my natural instinct is to gravitate toward the bad.

Advice that anyone could have given me, granted, but somehow when he said it, I tried to take it to heart. You don’t have much choice when you’re stuck in a tiny room with some guy staring at you and calmly explaining how fucked up you are. 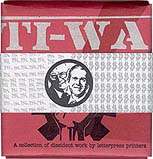 So yeah, here they are, and anti-climax is in full force. It’s a great little set, but at this point I’m kind of, “eh, whatever,” about the whole thing.

The sickest part of the story is that the war we were protesting back in 2002 is still going on, and even after more than three years the title of my piece, Still No Sign of Osama bin Laden, is relevant. Ripped from today’s headlines! Yeah.

Where is Osama? Who is steering this here ship? How long does a nuclear winter really last? People were asking a lot more questions like these during the summer, when gas was $3 a gallon here in Los Angeles. Now everyone is more concerned with the premiere of The L Word, or paying off their holiday bills.

Me, I’m still waiting. I don’t know what I’m waiting for now, but I’m usually just waiting. That’s why it’s so thrilling to hang around with me.