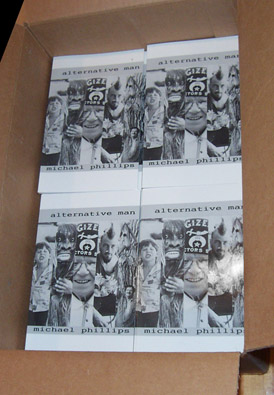 Way back in the olden days (January of 1995) I signed a fancy looking contract with Mother Road Publications for a book of poems and short stories. It was a long and drawn out birth (as these things usually are in the small press) but finally, in April of 1997, alternative man appeared.

It was my first book and I was pretty excited about it. When the first 5 or 10 copies came in the mail I opened one of them and smelled it. “Yeah, that smells like a real book,” I thought. Hey, you do weird things when it’s yours.

Mother Road Publications put out the late, great ATOM MIND magazine. I had been writing poetry for less than a year when I sent them a stack of my work, and much to my amazement, they took some for publication.

A lot of little lit mags took poems, and to me it was just the most strange and incomprehensible thing. “Well, this is easy.” Of course, over time I came to realize that those magazines had to fill their pages with something, so it wasn’t that big a deal to land a few poems in dozens of them.

But ATOM MIND was a cut above most of the slapped together zine-y mags of the mid 90s. It was large, thick, perfect bound (that means the spine is flat, the pages are not folded and stapled), and most importantly, it had a very small percentage of fat.

After the first few batches of work I sent, the publisher, Greg Smith, brought up the idea of doing a book. He was embarrassingly complimentary in his letters to me, and while I couldn’t really understand why, I decided not to worry about the “why” and took him up on the offer. Then came the aforementioned contract, a few months of me sending him more and more work, then the long wait for the book to become real.

Well, Greg had a pretty good distributor that got the book to a lot of independent book stores around the country, reviews were starting to come in – the whole thing looked like it was going to go very well.

Then he dropped off the face of the earth.

Our only contact had been through the mail, so I had no idea what happened to him or the press. ATOM MIND disappeared, no answer to letters – nada. Eventually I gave up trying to contact him. In the years since I have moved three times, so I knew there was no way he was going to find me. That was that.

I sold my small stash of 100 or so books through the smog.net site and here and there, up until March of 2005 when I shipped out the last one. After that I never thought I’d see any more copies. I figured they were landfill in New Mexico or baking in an abandoned desert storage unit, somewhere out there in the wild Southwest.

But a couple months ago I started to notice an unusual amount of Mother Road stuff popping up on eBay. I contacted the seller a few times but never got a reply. Every couple of weeks I would email again. The auctions kept coming and going, but I wasn’t getting a response. Then, a couple of weeks ago, Greg wrote me back.

He had been out of the country (his son was doing the auctions), and he told me the horror story that explained why he disappeared (that’s his story to tell, so I won’t go into it here). In my messages to him I had been asking if he had any copies of alternative man left. It was obvious from the auctions that he still had access to his inventory, so I held out hope that the answer would be yes.

Funny, you would think I’d have been happier if he said, “No, sorry, sold them all!” My priorities have always been out of whack. Anyway, he told me that he did indeed still have copies of alternative man fresh in the box, so I bought a giant stack of them from him, and they arrived on Wednesday.

It’s odd to have them here. They are like old, familiar ghosts to me. But they are here. If I was you, I’d buy a ghost book. I’ll even write my name in it, and scribble a picture that looks like something a troubled second grader would nervously scrawl on a bathroom wall with a crayon!

You can’t get shit like that on Amazon, babies!

All hail the Mother Road.