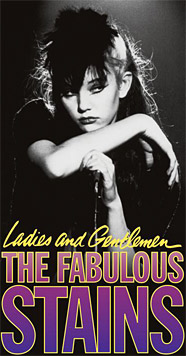 Okay, I’m going to rave about a fringe movie again, one that will only appeal to one out of every hundred people who read this, but it’s what I do, so don’t try to stop me. The last one, Rockers, is mainly of interest to old school reggae lovers and Jamaicaphiles, and this one will hit a chord primarily with old punks and possibly fans of Diane Lane and Laura Dern. It’s called Ladies and Gentlemen, The Fabulous Stains.

It was one of Lane’s first films after A Little Romance, which made a big splash in 1979 and landed her on the cover of TIME magazine. Lane had just turned 15 when they began filming The Fabulous Stains, and Laura Dern was even younger (12 years old when filming began!), with only a bit part in 1979’s B movie classic, Foxes, to her credit.

Also appearing in the film are Marin Kanter (as the Stains guitar player, Tracy Burns), Steve Jones and Paul Cook of the Sex Pistols, Paul Simonon of the Clash, Fee Waybill, front-man for the Tubes, Ray Winstone, Elizabeth Daily, Christine Lahti and a cast of thousands. 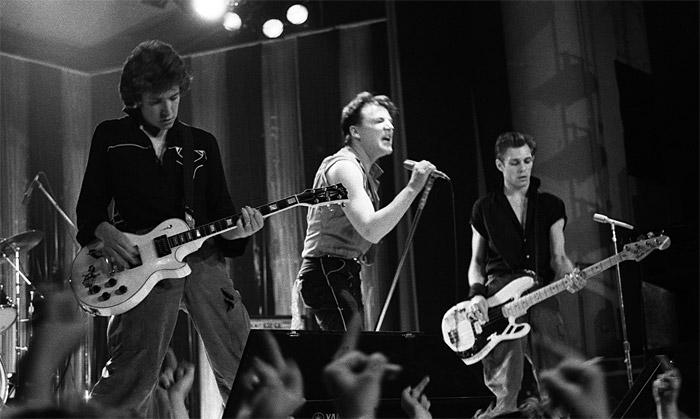 The film was directed by Lou Adler, who had directed only once before, Cheech and Chong’s Up in Smoke, and never directed a film again after The Fabulous Stains. Adler was more of a music business type, having founded Dunhill and Ode Records, both big labels in the 60s and 70s. He also managed dozens of groups, won Grammys – no slouch, but perhaps not born to be a movie director. He may, however, have been born to direct this particular film.

On the surface, The Fabulous Stains is a rock and roll B-movie rags to riches to rags story. Originally titled All Washed Up, the writer, Nancy Dowd, had harassment issues during production and wasn’t exactly thrilled with the way the film turned out (a tacked-on “happy ending”) so she had her name removed from the credits. 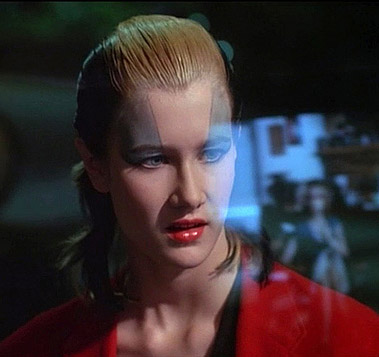 That happy ending was shot almost two years after production had finished because the movie tested so poorly with audiences. They simply didn’t know what the hell to make of it. Since they didn’t understand it in the first place, maybe a downer ending seemed a bit much.

But this movie isn’t for the typical “I dunno; I’ll see whatever’s showing” mall crowd. But for those interested in the music of the era (and the later Riot Grrrl feminist punk movement, some of whose key members have cited this film as inspiration), it is definitely worth a close look. 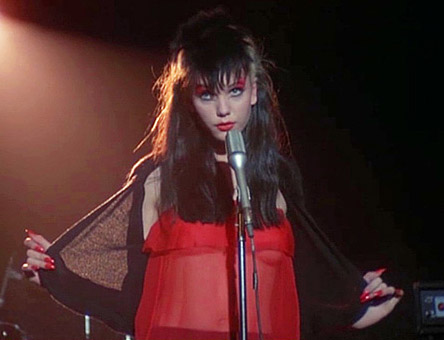 A B-movie, yes, but one that expertly captures many truths about the music business, perhaps more so than any other “rock and roll” film ever made. From the less-than-successful punk band (the Looters; Jones, Cook, Simonon and Winstone), to the even less successful – but once famous – glam/metal band, The Metal Corpses (Waybill), the film is populated by real-world characters and the look and feel capture that world and that era incredibly well. I credit Adler’s music business experience with supplying the stark, precise reality. No director who hadn’t lived some of this stuff could have possibly recreated it.

The film never played to mass audiences, in fact, it has been said that only two 35mm prints were ever made, and as of a few years ago, only one of the tattered prints survived, occasionally making its way to festivals and revival houses. But in the early 80s, a couple of early cable channels aired it, bootleg VHS copies were made, and from there The Fabulous Stains earned its cult status. 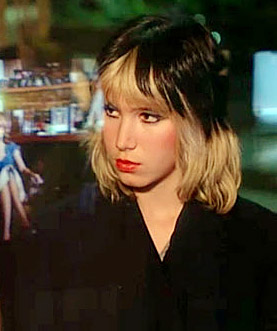 I was one of those who made a VHS copy from cable (or more accurately, the lone pre-cable channel in my building, ON-TV), back in the early 80s. I dragged that tape around the country with me for 20 years, forcing it on people whenever I could. Not many appreciated it as much as I did, but I always blamed that on the awful quality of the tape, rather than my possible lack of taste. The quality of all the bootlegs was poor because the channels that aired the film were mostly scrambled UHF signal “cable,” a primitive precursor to the digital cable services we have now.

Rhino has just released a DVD version of The Fabulous Stains, and it is a joy to behold. It is a widescreen transfer, which makes this the first time the film can be seen as-shot unless you were one of the three dozen people to see it in a theater. One of the main problems with the bootlegs was muddy sound, but the DVD is pretty damn clear all the way around. 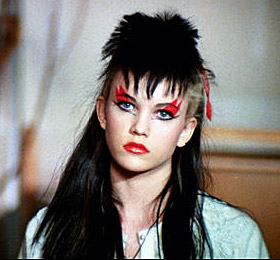 It’s almost 30 years old, so it doesn’t have THX DOLBY wraparound 3D ThunderSound, and although there is a 5.1 home theater audio setting, much of the sound in the film is definitely low budget indie, meaning you may have to back up a few times to pick up a garbled line here and there.

The DVD is thin on “bonus” material, but it does have a couple of great commentary tracks, one by Adler and one by Lane and Dern. Interestingly, a “making of” short exists, but it is not included here. The only place you can find it is on a documentary about the rainbow wig “John 3:16” guy who used to be on camera at every sports event years ago. You remember him. He eventually wound up barricaded in a hotel room with hostages (surprise?) – an interesting story in itself, but I have no idea why The Making of The Fabulous Stains is on there. Allison Anders, director of Grace of My Heart, Mi Vida Loca, Gas, Food Lodging and Border Radio writes the DVD liner notes. So yay Rhino, I certainly never thought this would see DVD release. 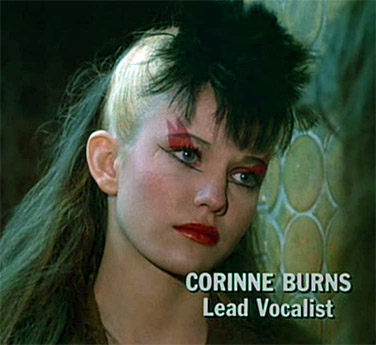 Oh yeah, the film itself. I should probably say something about it since I have probably bored everyone away by now with a thousand words of background.

In a nutshell, here’s the story; a Rastafarian named “Lawnboy” (Barry Ford) is driving the Looters and the Metal Corpses around the bleak Northeastern U.S. in his bus, managing a tour of tiny dives. He sees Corinne “third degree” Burns (Lane) on a television news show after her mother dies, and for various reasons, offers the Stains a spot on the tour. So the Stains get on the bus, and the fun begins.

I know, it’s improbable. But I have never seen another film that so successfully puts the bleak, no-budget rock and roll tour life onto the screen or one that so deftly captures the “out with the old, in with the new” moment in time when punk threatened to make metal obsolete. The film was made in Vancouver and Pennsylvania, and a cold, wet, overcast mood permeates practically every frame. If it sounds dismal, it should. The majority of life in a tour bus (or van, or car) is dismal. The Fabulous Stains nails that feeling perfectly.

The heart and soul of the film is the statement that Corinne wants the Stains to make. This is where the film gets into spooky precognition of the Riot Grrrl/third wave of the punk scene, with its strong feminist message. Lines like, “I think every citizen should be given a guitar on her sixteenth birthday,” and “They [men] have such big plans for the future, but those plans don’t include us. So what does that make you? Just another girl lining up to die.” Or at the pivotal moment of the film, “I’m perfect! But no one in this shithole gets me, because I don’t put out!” 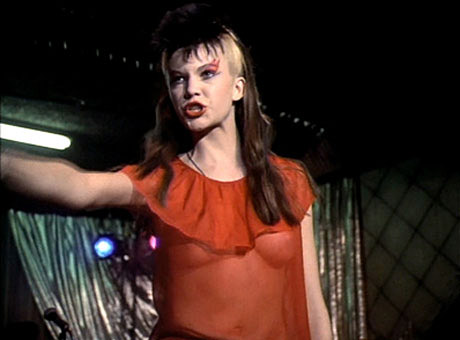 These are not the kind of things you heard from the actual female bands of the day, I promise you. Remember, this movie was made in the post-Runaways, pre-MTV period, so you have to put yourself back into that time to realize how foreign and entirely out of left field some of this stuff sounded. That Lane was capable of delivering such a believable and powerful performance without ever once crossing over into cringe or cheese territory – at the age of 15! – is really astounding.

So yeah, The Fabulous Stains. You could say I recommend it. Especially if you are old enough to remember those wacky late 70s, early 80s when everything seemed possible. At least until it all collapsed under a blizzard of emptiness, advertising (a.k.a. MTV) and mediocrity.

Even if you’re young and fresh and know full well that those old farts Green Day invented punk rock, it would be worth your while to watch The Fabulous Stains. I remember that I was slightly amused by watching all those old Elvis movies as a kid. That’s what this will be like for you. Another ironic relic that you can smugly consume while maintaining your practiced distance and sense of entitlement and superiority.