This DRUDGE REPORT site is really funny. I went there expecting some super-blog, or at least some original content. But all I found was a page of links. How did this angry closet case weasel a syndicated radio show (and a creepy form of right-wing-wacko web cred) out of a page of links to news sites?

Correct me if I’m wrong, but there’s never been anything there that wasn’t reported elsewhere. I mean, my hat’s off to the guy, I guess. He’s pulled quite a con job. But the whole thing just seems weird to me.

I say this because I’ve been subjected to his horribly unlistenable radio show on a few occasions, as my kitchen radio used to be tuned to KFI here in Los Angeles. Señor Drudge has a weekend show that runs for a couple of hours, and it seems to be on at a time when I’m in the kitchen trying to scrounge up some dinner.

The lad is very angry. More angry than me even, incredibly enough. But his anger is directed at “Hollywood” for the most part. It’s as if he feels like his innate talents have been overlooked by the powers that be, and his form of retaliation is to whine (and the boy can whine, let me tell ya) about how corrupt and useless all of Hollywood and the people who work in it are.

While I might not completely disagree with that opinion, there’s just something extremely creepy about the way he goes about it. 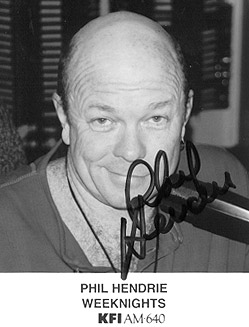 But the good news is I don’t have to listen to KFI anymore! When I moved out here in ’84 they were a pretty listenable joint, but over the years they’ve become just another tired shoutbox for right wing conservatives.

And listening to that blahblahblah is more boring than listening to flood waters tooling through the LA river, bringing down hillsides and mansions as it rumbles through the county. Well, actually that would probably be fun to listen to, but I digress.

The only reason KFI was still on the kitchen box was so I could hear the radio genius Phil Hendrie do his thing every weeknight. But the pods at KFI have yanked Phil in favor of yet another (surprise!) right wingnut. Jesus christ, what a yawn-fest that station has become.

Well, thankfully I don’t have to hear it anymore. Hendrie is on 570 now, and I have Sirius in the car, so KFI is history. Good riddance. Hey, do yourself a favor and listen to Phil.

On a totally unrelated note, how did we manage to lose two giants such as Hunter Thompson and the quite mad Dr. Gene Scott in the same week? the mind, as always, boggles.