I blather on a lot around here about music and punk and how great and holy it and I was back in the day, and I usually come off sounding like a smelly old man yelling at a bunch of kids to get out of his yard and go play ball somewhere else.

That I actually am a smelly old man doesn’t make it any more valid or palatable, so this time I’d like to pass the microphone to someone who is preserving a bit of musical history right here on the world wide internet.

Alice Bag, East L.A. Cholita, punk pioneer and founding member of the Bags, has a blog, and she has a great entry there that you should go read. It’s ostensibly about the Germs, but goes a little further into what punk was and what it is, and how if you weren’t on that pirate ship when it sailed off in the middle of the night, you can’t really know what that voyage of the damned was like. Nice analogy to the early days of flight in there, and I’m big on analogies, so go read it. 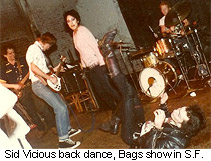 I never saw the Bags or the Germs or the Weirdos or any of the original Los Angeles punk bands. I was in St. Paul/Minneapolis, and it wasn’t until the second wave of punk, the tedious and humorless hardcore days, that the bands really got their shit together enough to borrow or steal a van and play outside of their hometowns.

So I was more in tune with Midwestern and East coast bands. L.A. seemed like the home to a lot of Johnny-come-lately’s, preening phonies and bandwagon jumpers, and for the most part it was (and is). But Bag’s extensive site documents an early punk scene that was messy, dangerous, goofy and most importantly, genuine.

I wish someone would do the same for the Twin Cities scene, which boasted some of its own punk bands as early as 1976. Maybe someone has written it all down and I’ve just never seen it.

Bag also has a very interesting Women in L.A. Punk section, consisting of interviews with her friends and other cohorts from the early scene. It’s purpose is to give a voice to the women who were there, which is, in and of itself, a grand and marvelous thing, considering that women are often overlooked when the history of anything is written down.

But in gathering these interviews Bag is also compiling what will no doubt become the definitive oral history of the birth of the L.A. punk movement. This is no small feat, and that’s why I’m pimping her site here, instead of the usual fascinating descriptions of me and what I’ve been up to. Um hm.