I conducted a poll today as I drove through the intersection of La Cienega and Pico at about 6pm. There were a couple dozen people on the corners waving flags and holding up signs that said, “HONK FOR PEACE!”

Now, it sounded to me as if everyone was honking their car horns, which leads me to believe that Americans, as a group, are in favor of peace. That is empirical data, but it is nebulous, because peace can mean different things to different people. 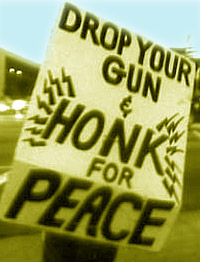 I think it’s safe to assume that very few people would stand on a busy corner holding up a sign asking you to honk if your life was free of stress, obligation or distraction. So therefore it is logical to conclude that those honking their SUV horns were expressing their support for the lack of conflict or war.

This being America, the only war I could think of that we are currently involved in is taking place in Iraq. so the obvious conclusion is that all Americans want to see an end to the war in Iraq.

In addition, I conclude that the “ribbon” stickers and magnets reading, “SUPPORT OUR TROOPS” that one can see affixed to the back of some automobiles, are similarly expressing the driver’s desire for the war in Iraq to end. After all, how better to support someone than to remove them from harm’s way?

See kids, research is fun! You can come to your very own scientific conclusions while driving, eating dinner, taking a shit, running a cable news network, radio station or even being senior adviser and chief political strategist to the President of the United States.

Anyone can do it! And the best part of it is, no matter what conclusion you come to, half of the people in the country will think you’re a genius! Think about it; if half of america thinks you’re a genius, that’s 150 million people, which is a lot of people to have on your side.

Of course, it’s not enough people to defeat a few thousand fundamentalists in another country, but it’s enough for a heck of a game of flag football out on the cape this summer!