Well, not really, more like a mere 13 ounces, but they could feel like ten pounds in the shower. “They” being my now chopped off dreadlocks.

I include a photo so you can bask in the horrible impressiveness that was my locks. Five years of growth, average length 32 inches. Drying time after shower: one hour with a blow dryer, 2 or 3 days without (you can’t have wet hair for two days, trust me on that one, so it was an hour with the dryer after each shower).

Why cut them off after all that time spent cultivating them? Well, they were starting to become a burden and a pain to deal with.

As if the aforementioned drying time wasn’t enough, they also had to be tied up and out of the way for many things, even sitting on the toilet (more than you wanted to know, I’m sure, but here you are reading this, so deal with it).

Also, if you stick with dreadlocks (or any unusual hairstyle I suppose) long enough, you begin to be defined by your hair. “Take 10th street until it ends, go left and slow down when you see the guy with the dreadlocks…I’m in the blue house across the street.”

Not that I have any aversion to being the neighborhood weirdo, but I think I can maintain the title even without the hair.

So off they came. All in all it was a torturous day, not because it pained me so to be without them, but because rather than buzzing them off with a clippers as a sane person would do, I left about four inches of stump on each one and combed them out.

Six hours standing in the bathroom with my dog’s metal comb ripping at my head. Whatever you imagine that experience to be like, multiply it by about 50 and you’re getting close to how bad it sucked. 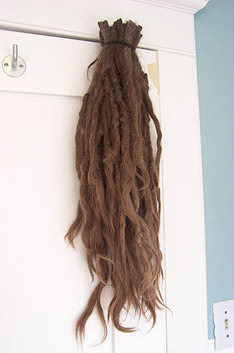 And to add insult to injury, now I look like a used car salesman or a shut-in with a flowbee, but it’s probably better than the buzzed look, which caused me a lot of trouble with the police in Gardena where I worked last time I sported it.

Maybe I’m not getting the message in all of this…hmm. well, it wouldn’t be the first time.

I had dreadlocks nearly this long back in 1989, and after I cut them off I had pangs of regret for months. This time around I have no such feelings. I’m not sure why I even grew them this time, so it’s not a big deal to be without them.

People in my day to day life will only freak out for a week or so, then they’ll go back to ignoring me. As well they should.

There is no moral to this story and no great revelation and probably not even anything of interest to keep you reading up to this sentence. But it’s my life and my site, and without self-indulgence life would be as dull and stale as a super bowl or blink 182 concert.

BONUS TRACK:
Every time someone says “dreadlocks” all manner of questions come up, so as a public service (and so I don’t have to answer them individually) I’ll answer some of them here.

Those are bitchin’! where did you get them done?
Nowhere. Real dreadlocks aren’t “done,” they grow over several years after one stops cutting and combing their hair. Don’t believe me? Throw away your combs and brushes and see for yourself.

So you have to put some gross stuff in there (bee’s wax, glue, chemicals, cow shit) to get those, don’t you?
No. Not unless you consider shampoo to be gross. The cleaner your hair, the better it locks up. Keep it away from conditioner though.

Isn’t it hard carrying those things around? Do they make your neck hurt?
No. See the first paragraph. They were almost 3 feet long and didn’t even weigh a pound.

So do you think Bob Marley is god or something?
No. Though he’d probably do better than whoever has the job now.

Got any weed?
No.

So there you have it. More inconsequential ramblings about ME. Because I’m so damn interesting and important! I now return you to the rest of the inconsequential and rambling world wide internet.