I don’t want to interrupt my creative genius flow, so I go into the kitchen and grab a cup of noodles, or more accurately, a Maruchan Instant Lunch.

Though it’s worth noting that the Maruchan Instant Lunch is virtually identical to the Nissin Cup Noodles. Are they created in the same factory somewhere, salted with the tears of child laborers? I should know the answer if I want to be woke, but I don’t, so I guess I’m not.

It’s also worth noting that Cup Noodles used to be Cup O’ Noodles here in the United States of America. But in 1993, a vicious anti-Irish faction high up in Nissin management unapologetically forced the name change.

No one of Irish heritage noticed the change at the time, because they didn’t eat Cup O’ Noodles. Which may not be entirely true, considering 23andMe (they squish all the words together, not me) says I’m something like a third Irish, and I eat them.

In any event, I prefer the Maruchan Instant Lunch, because – well, I couldn’t tell you why, since, as I mentioned, they are virtually identical.

Maybe the Maruchan has better chicken dust than Nissin. That could be it.

Get to the Point

Okay, let’s get to the valuable how-to tutorial, How to Make Noodles Using Coffee Instead of Water.

First, you might be curious as to why anyone in their right mind would make noodles with coffee, and that’s a fair question.

Like any proper human, I use a Keurig pod coffee maker. Is it wasteful? Oh yes. But is it more wasteful than half a pot of cold coffee sitting in Mr. Coffee at 2 P.M.? I don’t know. The jury is still out on that.

But one of the tremendous undocumented features of the Keurig is that it will spit out plain (very) hot water if you don’t jam a coffee pod into it. That hot water is perfect for making a cup of (or ‘O) noodles.

Every day as I stand there watching the hot water splatter down onto the rock hard noodles, I wonder, “What if I put coffee in there?” Then I laugh to myself and think, “Only an idiot would do that.”

Which was true until today.

Please Get to the Point

Here are the detailed, step by step instructions for making your own Coffee Noodles™.

These are the main ingredients: noodles and a cup and coffee. 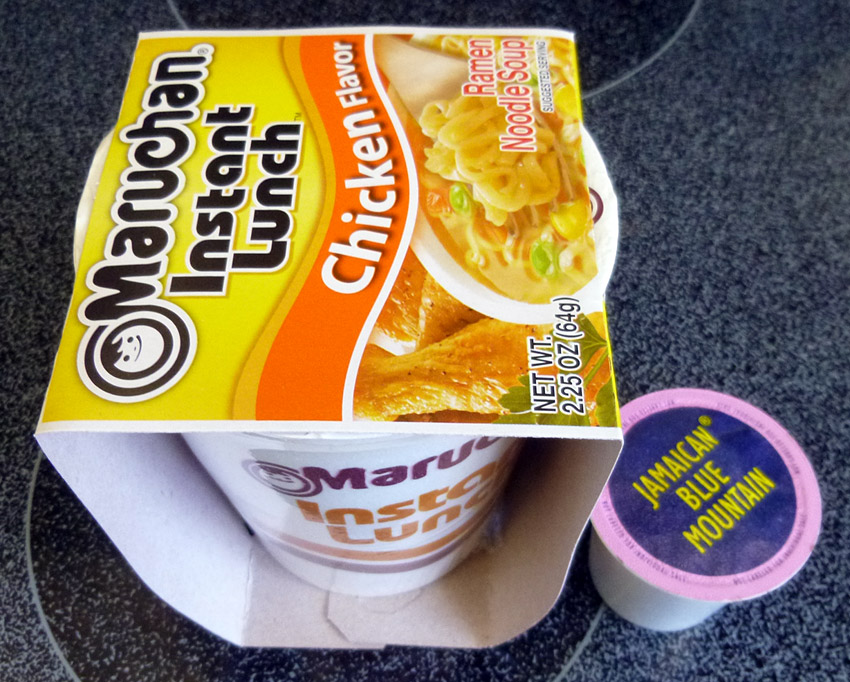 Those of you who are hyperfocused and aware of your surroundings will notice that I’m using Blue Mountain coffee. That was chosen for its low-key, flavorful, yet mellow taste.

I also use a really old bottle of crushed red peppers, which is not pictured here.

First, and I apologize for not getting a picture of this crucial step, you have to scrape all the dry “vegetables” out of the noodle cup and into the nearest trash can.

Those little dry peas and bits of corn are not fit for human consumption, even when they are re-hydrated. Get rid of them.

And get rid of as many of the little orange bits as you can. I believe they’re supposed to be carrots. Don’t beat yourself up if you can’t get them all. They are difficult to wrangle. You’re going to have to choke a few down in the finished product.

Once you’ve sterilized your noodle cup by removing the inedible bits, shake in a few shakes of crushed red peppers. And by “a few,” I mean four or five or six if you’re feeling tangy. I’m usually feeling tangy.

The peppers don’t have to come from a store that closed almost five years ago. You can use a fresh bottle if you’re rich or fancy. But I can’t guarantee the results if you start substituting gourmet ingredients.

Your appropriately peppered dry noodles and coffee pod should look like this: 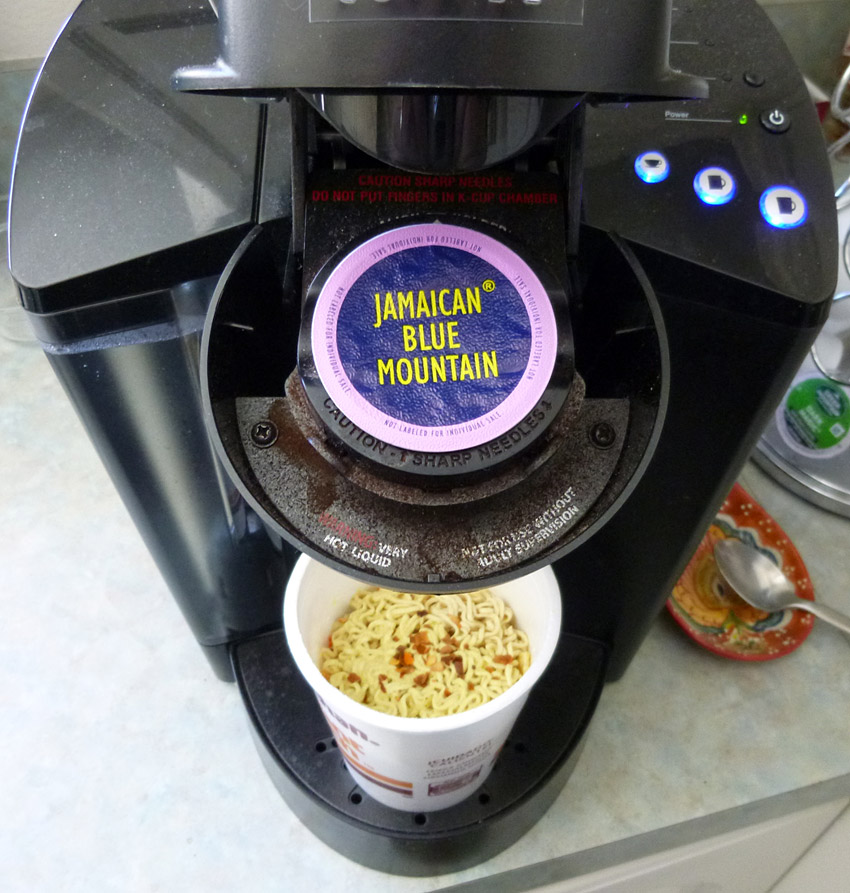 Note the random coffee grounds on the pod holder. Those are important, as they impart a sense of adventure to the final taste.

Who knows where those came from? It could be a double-caffeinated coffee, dark roast, donut shop – it’s a mystery, but it’s a necessary ingredient. A clean coffee maker is a death machine.

Also, note that the noodle cup paper top has been completely removed. That is a controversial move, but one that I stand behind and endorse.

Trying to complete this recipe with half a paper lid in your way is a fool’s errand. If you leave the lid partially attached, you’re just asking for trouble, heartbreak, and possible injury.

Remove the lid. Come toward the light.

Before you clamp the lid down on the coffee pod, irreversibly puncturing it, reflect on what you’re doing.

You’re about to drench dry noodles in scalding hot coffee in order to “cook” them. It’s not normal, and it could have unexpected side-effects. More on that later. Only proceed if you are courageous and pure of heart.

If you’re still with me, go ahead and bring the hammer down. Snap the pointy bits of the machine into the pod and hit the middle button, the regular-sized cup button. That’s about eight ounces, and it’s a good noodle cupful.

Then watch the coffee flow into the handy styrofoam container/bowl. 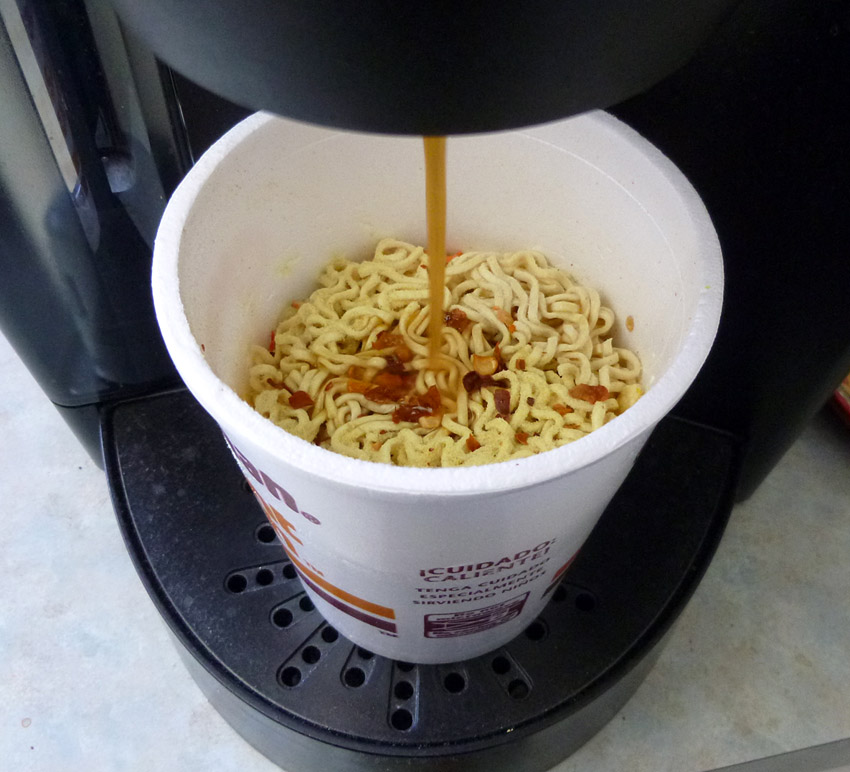 When the cycle is complete, you’ll be confronted with something that looks like this. 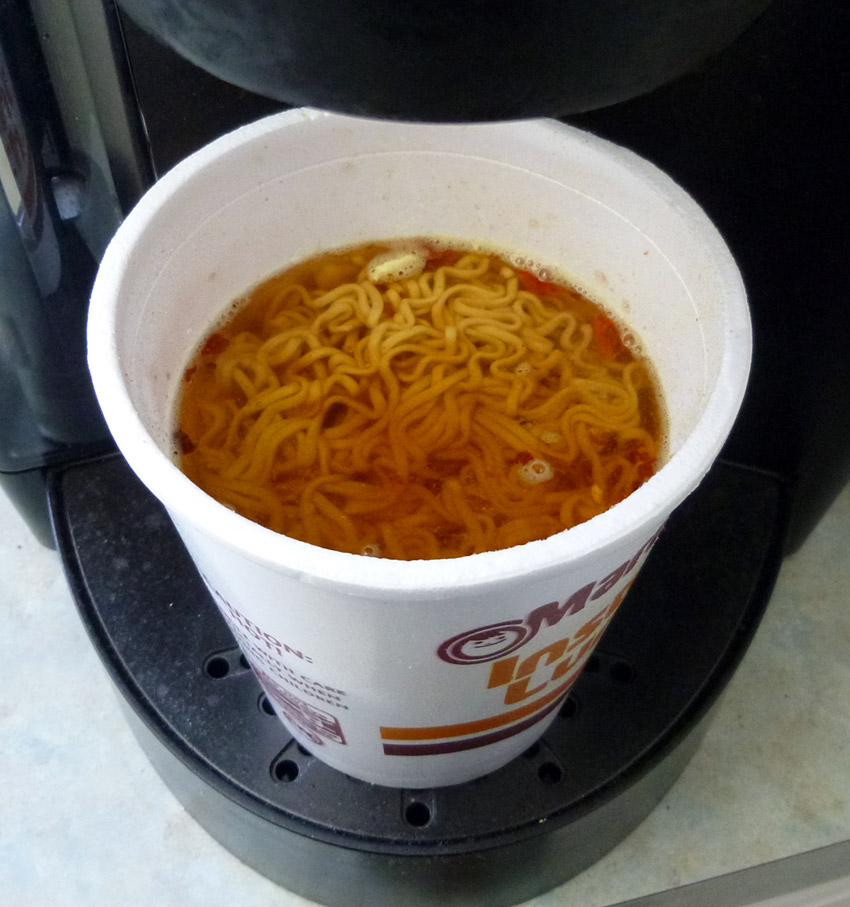 Hmm. Suddenly it doesn’t look right, does it?

Because it’s not. It’s not right, and it’s not normal, which is why you’re doing it, yeah?

You don’t toe the corporate line. You don’t dance to their electronic drum sound. You’re a wild pony, and there’s no stopping you.

This is where a lot of amateurs or first-time noodlers make a fatal mistake. The packaging will tell you to replace the cover, wait three minutes, then eat.

Three minutes is nowhere near enough noodle soaking time. And that applies whether you’re making Coffee Noodles™ or everyday noodles.

So to complete step three properly, wait about a minute, then do a preliminary stir with a metal fork, ensuring all the noodles are covered. Then replace the lid and wait ten minutes.

Yes, ten minutes. It will be difficult, but if you want the full noodle experience, don’t eat those things after only three minutes. They’re not done.

And don’t eat them with a plastic fork. That’s just gauche. We’re not in a trailer here. Show some respect. If not to the world, to yourself.

If you are in a trailer, what’s that like? Doesn’t it make it hard to get a good night’s sleep knowing that someone could come along and hook your house up to a truck and drive away with it while you’re sleeping in it?

That would worry me all the time. I don’t think I could do it, live in a trailer. But who knows, life being what it is. Maybe we’ll be neighbors in the trailer park one day.

Okay, when ten minutes are up, you can proceed.

Gingerly remove the lid from the noodle cup.

Be careful, hot water is going to try to spill off the lid onto your hand, which is a mess, and no one wants that.

Remove the lid carefully, allowing the condensation to drip into the cup. Then place the lid in a conveniently located trash receptacle. The lid is finished. It’s done what it was born to do.

Now give the noodles a final stir and eat them by placing a forkful into your mouth and chewing vigorously. 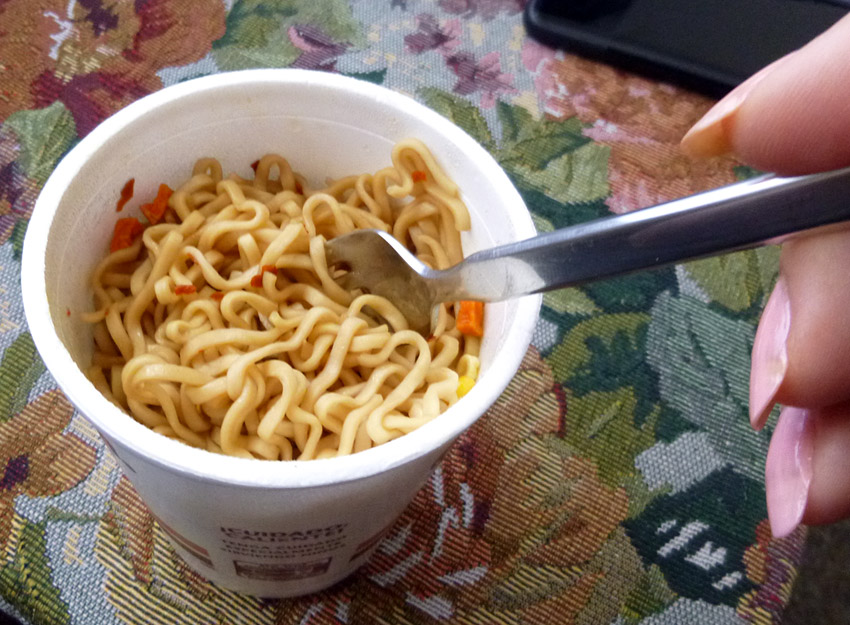 Actually, they don’t look much different than a “normal” cup of noodles, do they?

But looks can be deceiving.

Coffee Noodles™, How Do They Taste?

That’s the important question, isn’t it? How do Coffee Noodles™ taste?

Well, let me try to explain. They’re almost like restaurant noodles, like a lo mein noodle or a fried noodle, or some other noodle that gets soy sauce on it.

Mostly they taste like noodles cooked in coffee, which is what a lot of people might describe as “strange.” The texture is right, the moisture is right, but there’s something about the coffee and chicken flavors together that’s, I don’t know, disturbing.

Or even once, for that matter.

Would I Make Coffee Noodles™ Again?

Not (only) because it’s disturbing, which it is, but because it gets in the way of my post-lunch sleepy phase.

I rely on that phase to add a dreamlike quality to my writing, which is important when you’re writing technical tutorials. If you don’t insert a half-awake part, your writing will be dry, and not at all tangy.

The Coffee Noodles™ made me jittery and buzzy, or in layman’s terms, the opposite of sleepy. Maybe because I drink 16 ounces of cold black coffee every morning, and the additional cup was just too much for my delicately balanced constitution.

But I would encourage you to try Coffee Noodles™ yourself. Then go tell your friends and family to try it.

Soon Coffee Noodles™ will be sweeping the nation, and you can say you were there at the beginning. Like seeing The Beatles in Hamburg or Joan Jett working in a t-shirt shop or something.

Let me know how it goes for you. Good luck.