It’s a beautiful time to be a photographer. Just like it’s a beautiful time to be in a real band with real non-computerized music, or to be an artist who paints something other than encephalitic pre-teen girls in frilly dresses with dead deer eyes that only appeal to perverted Japanese wankers and U.S. hipsters who would worship dog shit if you told them it was cool to do so.

I say it’s a great time because I feel the inevitable pendulum swing away from the dead and dying and back to the living. It may not happen tomorrow or next year, but there are a whole hell of a lot of disenfranchised youths out there who are aching for some truth. One of the ways they are finding their truth is with old music equipment, old artistic technologies, and crappy, less than precise photographic equipment. 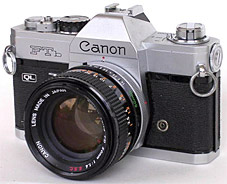 I have taken about 30,000 pictures in my life – no exaggeration – I used to carry a camera with me everywhere I went, from the time I was about 15 years old and stole a Canon FTb (though I can now say, kids; please do not steal shit. It’s really not cool. And I got my ass kicked really bad for stealing that camera, so I’m living proof that crime doesn’t pay).

Of course, ass kicking and all, I hung on to the camera. I went on to steal enough dark room equipment to develop my own black and white film and prints, and for a lot of years I did just that. Amazing friends and family with big old prints that they oohed and aahed over then stuck into drawers. If they could find drawers big enough to fit them. 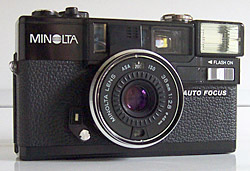 I used that Canon until I was about 21 or 22 years old, then I traded it for a really big bottle of Jack Daniels and picked up a Minolta HI-MATIC AF2. I still have the Minolta, in fact I took some pictures with it a couple of weeks ago. That camera went to a dozen countries with me and just about every U.S. state except Alaska and Hawaii. It’s basically a point and shoot camera, but I got some wicked, wicked pictures out of the fucker. Very high quality and very much recommended since you can get them on eBay now for $10 – $20! 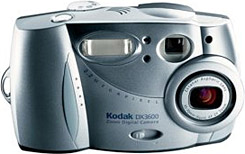 Then, dear friends, the dark days came down like putrid Seattle acid grunge rain. After 20 years of relying on the old trusty Minolta, I took out the batteries and put it away in the drawer to make way for the Kodak DX3600 Yes, a digital camera.

At first my joy knew no bounds – “Jesus christ, I can hold this thing above my head and see what’s in the frame through the LCD readout on the back!” Yeah, that was great (actually, I still think that’s the only worthwhile feature of a digital camera). “Holy shit, I just put a giant memory card in here, I can take 6,395 pictures! Wooooo!” Yeah, yeah. If only the pictures didn’t look like flat, dead flowers, run over by every car in a funeral procession, sucked dry of all life and color.

I can barely put my disappointment with digital photography into words, except to say that I took maybe a few hundred pictures over the course of 6 or 7 years with the digital camera, that’s it (and before you say, “Yeah, mjp, that Kodak is a piece of shit, try a real digital camera!” – I did, I also used Carol’s Canon Power Shot G3, which is (was) a pro camera, far from a piece of shit).

So, honestly I kind of gave up on photography. Because really, what is there to photograph anymore? Well, as it turns out, there is quite a bit left to photograph. 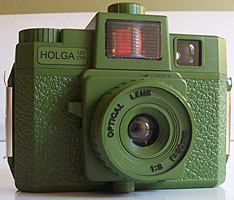 Let me list some of the great features of the Holga for you. You can buy one of these Chinese made masterpieces for $25 – $40, it leaks light, there is vignetting of the prints when you shoot 6×6 (kinda like looking at life through a toilet paper roll), very vague try-to-guess-if-it’s-right focusing, and an imprecise and imperfect plastic lens. As if that weren’t enough, the flash will go off twice if it is in the mood to do so, and sometimes the back falls off while you’re using it!

Sweet jesus, how could you not love a camera like that?

Oh, did I mention that there’s a little color wheel that rotates around the onboard flash so you can flash in blue or red or yellow? Come on man. It just doesn’t get any cooler than that.

Listen, there are probably a million different 35mm cameras just as clumsy and error prone out there, but the Holga shoots 120 film for honkin’ big 6×6 negatives. Oh yeah, kiddies – negatives 4 times the size of a 35mm negative (or is it two time larger – I was never any good at my gozintas). So you can make big square prints featuring all the aforementioned fuckups and unpredictability.

Long story short, the Holga makes photography fun again. When I shot with expensive cameras, the majority of the pictures sucked. It was like you should only push that shutter button if something important or artistic was happening. I felt like that was a waste (and that I sucked as a photographer, which may be true, but now it doesn’t matter anymore). With the Holga it isn’t a waste, it’s a surprise and sometimes even a miracle.