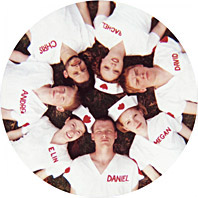 I saw a really interesting documentary called, Danielson: A Family Movie, and it got me thinking about a lot of things.

Mainly about why so many “Christian” performers feel compelled to sing about the blood of Jesus in every song. As if a song that fails to mention Jesus a dozen times is some kind of one-way ticket to HELL.

The only other genre of popular music that has such a strong biblical bent is Reggae, but those guys know how to sprinkle the Jah songs among other, more universal, messages.

Daniel Smith, or Danielson, is an odd, creative guy. He is also a devout Christian. But because he doesn’t beat the listener over the head with continual references to his lord and savior (or his lord and savior’s blood, or rugged cross), his art is accessible to everyone. At least everyone who enjoys weird stuff.

For the first half of the movie I was asking myself, “Is this guy ever going to crack the goofy facade and show us who he really is? This has to be some kind of ironic, post modern pose…” but it isn’t. He is what he is, and it’s really something to watch and hear. Inspirational even.

So what, am I some kind of anti-Christian? No. But I am an atheist, and that colors my view of all things religious. It isn’t exactly cool to say you’re an atheist, and when I was younger I avoided the tag, saying that I was agnostic. But that wasn’t exactly true.

I believe I came by atheism naturally, as there was no religion practiced in my family. My parents were not atheists, however. In fact, my mother always said that we were Lutherans, but I never saw the inside of the Lutheran church in our small town.

My father’s Army dog tags said ROMAN CATHOLIC, and when I asked him what that meant, he said, “Nothing. But you had to write down a religion.” (There is a great line in Ken Burns’ documentary on World War II, taken from a letter written by an American soldier; “Dear God, please help us. But don’t send your son. This is no place for children.”)

So I was not raised by atheists, but without a religious doctrine presented to me every week I arrived at atheism through my own experience and observation. Which makes me wonder if a child raised without religious influence would ever come to the conclusion – on their own – that there was a GOD? Of course it’s impossible to grow to adulthood and be completely unaware of religion, so the question is moot.

The majority of Americans claim they belong to one religion or another, whether they practice it or believe it. Unfortunately, those who are a little more vocal about it have never struck me as being particularly good people. What I mean by that is most Americans who are adamant about you knowing what religion they are, and want you to follow that religion yourself (or suffer the dire consequences), are fundamentalist Christians.

But I’m afraid that I have yet to meet a Christ-like Christian of any flavor. Sorry. I have met many devout Christians, who, if you strip away that label, behave just like any other person. They gossip, cheat, steal – you know, the whole human gamut.

“Well then your problem is with fundamentalists, not religion!” you might say. Okay, sure. But without religion there is no fundamentalism, so they are inseparably joined. Yes, I know that people would still hate each other if there was no religion, but at least they’d have to think up some creative new reasons for it.

The only group of people I ever knew who behaved in anything approaching a Christ-like manner were Rastafarians. You probably just said, “What the fuck?!” either out loud or to yourself (assuming you know what a Rastafarian is), and I suppose that’s understandable.

But when I think of all the people I have met in years here on the planet, those who were selfless, kind, accepting, non-judgmental and strict interpreters of the bible were all Rastafarians. I certainly never met a Christian who fit that bill. None have even come close.

Christopher Hitchens wrote in Vanity Fair about the tour promoting his book, God Is Not Great: How Religion Poisons Everything, and in the article he made an excellent point about morality. At every stop on the tour he posed the following challenge to the audience; “Name one moral action or statement made by a person of faith that could not be made by a nonbeliever.” He reported that no one could come up with an example.

That’s an interesting thing to think about, and it elegantly disproves any unique relationship between morality and religious belief. In the letters section of the following issue of Vanity Fair a woman gave her answer to his question: “prayer.”

I’m sure she believes she just threw down a devastating trump card and did a little dance around her living room when she saw it printed in the magazine, but it’s a ridiculous, naive answer. Prayer is hardly a moral action.

On the contrary, prayer is usually quite a selfish action. People praying for luck or good fortune or victory in a sporting event. It is a very self-important idea to believe that the superhuman deity that created you sits around all day watching how shit goes for you. Pulling a string here and there to help you out. Those godless idiots sitting around in the dirt and starving to death in Niger will just have to wait, it’s World Series time, and the Red Sox are praying!

The kind of God who takes an unhealthy interest in every individual is kind of a dick anyway, if you think about it. Creating you and then threatening to punish you forever and ever if you don’t properly acknowledge him as the supreme be all and end all. Who wants to worship such an insecure, angry asshole? Not me.

I don’t want to worship Haile Selassie either, so I’m left with worshipping nothing. Which may sound terrifying to many of you, but it is very liberating. I can admire grass and sunshine and bees and dogs without a lot of worry over how they came to be here for me to enjoy.

Religion is an attempt to answer unanswerable questions, and put some kind of glowing golden frame around the chaos, disorder and ugly unfairness of existence. I understand that the idea of living amidst chaos bothers a lot of people, but I don’t understand why more people don’t embrace it as a positive and exciting thing.

You may as well, you certainly can’t change it.