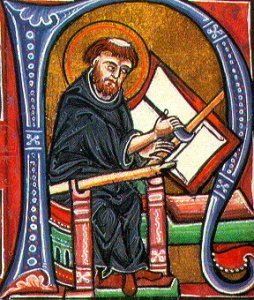 There’s an interesting story in Clay Shirkey’s book Here Comes Everybody where he talks about scribes – the monks whose tedious copying work used to be the sole method for duplicating books. When the printing press and movable type came along, the scribes were made obsolete practically overnight.

Yet one of the monks was (understandably) anti-printing press and wrote a book called In Defense of the Scribe, arguing that scribes were still important and relevant. And how did he publish that book? With movable type printing, of course!

The big entertainment conglomerates are not as clever as that 15th century scribe. Like the monk, they argue that they are still important and relevant, but they are failing to do so in a clever and subversive way, making use of the new and inevitable technology. So the scribe has them beat there.

Every human being over the age of seven can clearly see how horribly wrong and clueless these companies are, so for them to be arguing that they are still relevant is kind of a public joke that everyone but them seems to be in on.

And thank your respective gods that they are no longer relevant, because they are no more than elaborate rackets created to make a few people rich off the work of a creative underclass.

Seeing them scramble for their last few millions, squeezing it from ridiculous targets like Pirate Bay or the parents of the kid down the street who was caught running Kazaa or BitTorrent is like watching rats drown in a rapidly flooding river. There’s no satisfaction in it, but when they’re all dead, you realize that you are happy that the pests are gone, and life will be better without them.

What are we moving toward? Anarchy? The death of quality entertainment? No, we are moving toward a world where tens of thousands of artists can make a living selling their work rather than fattening the wallets of a few hundred wet corporate rats – or worse yet, stockholders – acting as unnecessary gatekeepers and middlemen.

The entertainment industry as we knew it only hampered creativity. It did not cull the best of the best or weed out the crap so that you could safely listen to any record or watch any movie secure in the knowledge it would meet a certain standard of quality. It did quite the opposite. It pandered to the lowest common denominator to milk the maximum profit from the captive audience consumer.

Look around, big time recording artists are all just lifeless rehashes of something or someone from the past. And movies – has there been an original idea in a major movie in the past 20 years? What number was behind the title of the last movie you saw at the multiplex?

Some people like to weep and wail that breaking down the barriers to publishing books, music or films is resulting in a tidal wave of mediocrity and amateurism. Well, that’s true. I’ve probably weeped and wailed the same thing myself at some point. But how is that any different from the mediocrity that we suffer at the hands of the conglomerates? The only difference is the conglomerates are highly paid filters that seem to filter out quality, rather than let it through.

In the early punk days we used to shout that the world was changing and the old guard had better pull their socks up and prepare for big trouble. Well, we didn’t really have anything to base that threat on, but now we do. Everyone can see it, and everyone embraces it. With the exception of the parasites who are terrified at the thought of losing their hosts.