David Johansen and Syl Sylvain are not the New York Dolls.

So why do I keep reading about a “New York Dolls” reunion? That’s like saying, “Come on all you old hippies! We’re going to have a BEATLES reunion!” It would kind of suck, wouldn’t it, without John Lennon and George Harrison.

Well, that’s what the fops and dandies promoting the Dolls reunion are offering you. A half-assed approximation of the real thing.

The New York Dolls were Johnny Thunders and Jerry Nolan. They were the heart and soul of the group. Johansen showed his true colors with the “Buster Poindexter” head-scratcher, and Sylvain…a nice enough guy, but he kinda went jangle jangle on the guitar somewhere underneath the horrible, ugly onslaught that was Johnny, Jerry and Arthur.

Most “reunions” are purely cynical moneymaking grabs, and while I don’t fault people for cashing in on something they put a lot of time and effort into, these reunions are about as relevant as a buggy whip or an Edison cylinder.

But if Johnny and Jerry and Arthur were alive, you could have a Dolls reunion, because those ridiculous sons of bitches never stopped doing what they did best. Unlike Johansen and Sylvain.

Hey, I know you don’t give a flying fuck about the New York Dolls, but without them, we wouldn’t have a lot of the music and style that we take for granted now, so show some respect (on the other hand, I guess we can blame the Dolls for the fact that we continue to suffer through 25 years of post-peak Aerosmith, so a case can be made either way).

A full four or five years before the Dolls there was a little band called the Stooges, and trust me kiddies, without them the world would be a different place. I know that’s a reckless and probably stupid thing to say, but the influence of the Stooges goes way, way, way beyond what you may think.

But this is not about the Stooges. And it isn’t about the New York Dolls, Aerosmith or washed-up-band-reunions either. 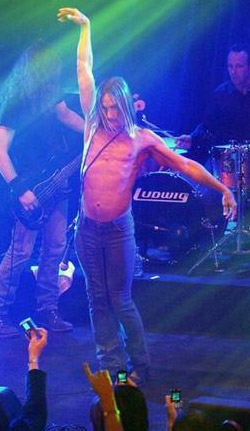 Okay, there’s “old faithful” Iggy doing his thing, but look at the audience.

In this picture alone you can see three people taking pictures. The one on the left may be a camera, but the other two are definitely cell phones.

So…why am I upset about that? Big deal, right?

Well, because, god damn it, no one is content to just experience something anymore. Everyone is documenting everything. And for what? It’s a fucking rock and roll show! Pry the cell phone from your idiotic hand for an hour.

Oh yeah, and take your head out of your ass while you’re at it.

I watched the opening “ceremony” of the Olympics (because I read Bjork was going to perform – but that’s a horror story for another day), and half of the athletes walking out and being introduced were recording with video cameras.

That’s so absurd I can’t even begin to wrap my tiny mind around it. Here’s Joe Shmoe, who, after the Olympics, isn’t going to do anything of note – or even worthwhile – with his life, and the dumb ass is hoisting a camera as he walks around the Olympic stadium in Greece.

The idiocy of this is almost incalculable. “Well, I don’t really remember what happened because I was working the camera…but I got some great shots!”

The first live band I ever saw – aside from junior high cover bands – was the New York Dolls at the Minnesota State Fair (yes, really). They played in a sweaty little shithole called the “Teen Center” to about a hundred bored farm boys who took offense to the whole scene and tore posters down from the walls, shaped them into ridiculously oversized paper airplanes, lit them on fire, and sailed them at the band.

You can’t catch a scene like that on a cell phone. Or a video camera. Or a webcast or MTV or anything else. You have to experience it.

But here I am, typing on a web site, complaining that we don’t savor experiences anymore. What the hell? The web has done more to ruin real life experiences than anything man has been able to create since we crawled out of the swamp. But I really like it, so maybe I should write something about how lame and worthless I am.

Then what remains to be said? I don’t know. I could type about the now-51-year-old-punk-rocker who I played in a band with 24 years ago who is writing me long, nasty emails because I dared to say a few less than flattering things about him in some forum a few years ago.

But that would be just too much rawkunrowl for one day, maaaaaan. Besides, the Olympics are on, and I don’t want to miss one minute of the badminton competition.

I hope TiVo is catching it all.