I was reading an article this morning about the author who was tasked by Jackie and Robert Kennedy to write about John Kennedy’s assassination in 1963. It’s an interesting article, but the thing that got me was something that was unrelated to the book.

If you look at the famous photo of Lyndon Johnson being sworn in as president on board Air Force One, you can see little spots of JFK’s blood on Jackie’s pink Chanel suit. White house advisors wanted her to change into a clean white dress before the swearing in, but she said, “No. Let them see what they’ve done.”

Let them see what they’ve done. Holy shit. I had to stop and re-read that. 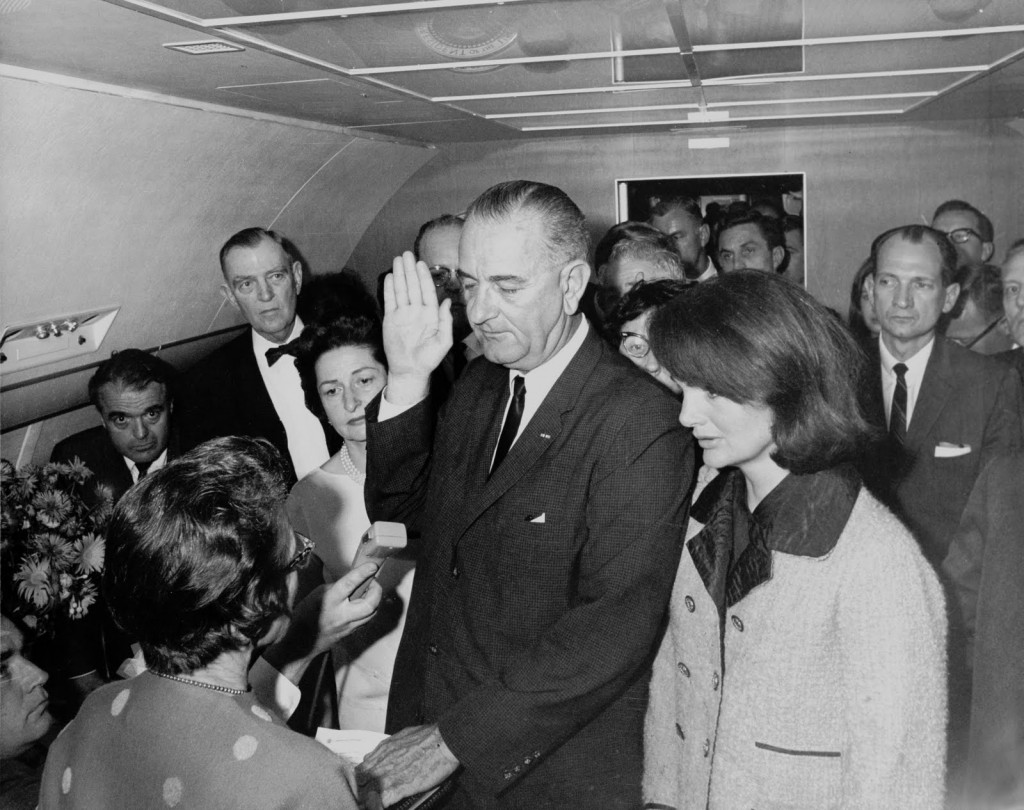 If you are unsure of who she meant by “them,” consider this: the political atmosphere in Texas – and Dallas specifically – at the time was very anti-JFK. He was widely demonized by Texans and other ignorant rednecks, who characterized him as a communist and Jew lover. At least one member of congress and even the batshit crazy “Reverend” Billy Graham warned Kennedy not to go to Dallas, saying it was too dangerous.

The hatred ran very deep, the good god-fearing people of Texas making sure that even their children were indoctrinated with a blind anti-liberal bile. One Dallas 4th grade classroom actually erupted into cheers when they were informed of the president’s assassination.

Think about that for a minute.

Does it sound sadly familiar to what’s going on today? It should. The same morons and simpletons kept their kids home from school on Tuesday rather than subject them to the president’s speech to the school kids of America. Because, you know, Obama is the devil.

I am always thinking that I should try to understand people’s point of view, to know where they are coming from and what motivates them. And, especially lately, I do try. But it is extremely difficult to give any credence at all to such awe-inspiring ignorance and stupidity, so I struggle. I understand what is at the root of it, but I can’t deal with it. I’m not a big enough man.

The ridiculous truth of the situation is that as humans, we all want pretty much the same things. But arbitrary and pointless political distractions stand in the way of us ever realizing that. I am not a conspiracy theorist, but I do believe that this is exactly what the politicians want. As long as you think the other guy is evil incarnate, you won’t have time to think about the real source of evil.

I also read an interview this morning with poets Hosho McCreesh and Chris Cunningham, talking about their recently published book of letters, Sunlight at Midnight, Darkness at Noon

. In the interview Cunningham says, “I still have hope that given enough shit to eat, Americans will get tired of the taste and demand something more delicious for supper.”

Well, it’s been 233 years my friend, and I don’t see that things have changed one iota since the revolutionary days. It could even be that things are worse. I’m pretty sure half this country would lynch Obama when no one was looking if they thought they could get away with it. Meanwhile the politicians continue to perform their cheap, transparent, threadbare magic tricks to amaze and confound the rubes in the tent.

I’m glad you guys hold out hope. I wish I could.