Why start again? I think I stopped for the wrong reasons. I thought writing for the blog was taking away from writing for the mjp books type stuff that you see here on the main site.

You know, the real writing that little teeny tiny diminutive groups of people read. But I found that wasn’t the case, and that there are things that are just bloggy and belong in a place like this. So there you go.

The blog at smog.net ran for six years, and the site itself was really hopping for about eight. It became pretty popular and busy and when I decided to shut it down, the only thing that remained for a while was the blog. It was a captive audience of about 40,000 visitors a month. Kind of like hitting the blog lottery. 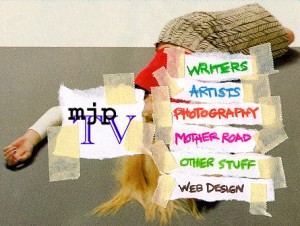 But a lot of those visitors wised up when they found all the other artists and writers and photographers were gone, and by the time I shut down the blog the site was down to 500 or 600 visitors a day.

Lately I’ve been enjoying posting on Google+, but sometimes I just want more space to spread out. Like with this overly long and probably quite boring post. 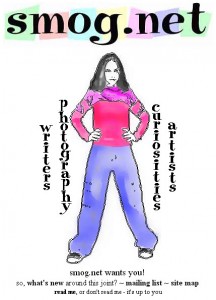 The images here are from smog.net, which started out life as mjptv.com. Then I changed the name to Monkeychow, but I couldn’t get the domain name because it was owned by Ralston Purina, who made a monkey food called – can you guess? – Purina Monkey Chow. Yeah, I know.

But in those days there were still some short, real-word domain names available for the cost of registration, so I picked up smog.net. I keep it because it’s still cool to have a four letter word domain. And becasue I live in Los Angeles, and we used to have smog here.

So that’s why this blog is here. And that’s why there is a three and a half year gap between this post and the previous one. Not that you asked, but I’m full service, baby, make no mistake.