So, this band I was in during the late 1980s was in a movie. It was a lot of fun. You know, pretending to play for hours while they film you from on top, behind, up your nose and every other which way you can imagine. Yeah, it was a real blast. “A little more energy, fellows!”

Okay, okay, let me summon my spare energy after four hours miming the same song. Toward the end I couldn’t even remember how to play the song, I was so punch drunk, so I was just moving my fingers around on the guitar, like an actor! I always hoped that would make it into the movie, but it didn’t. 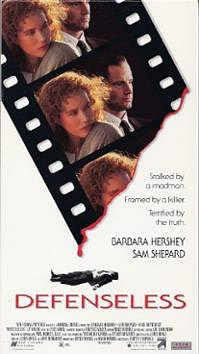 The movie was called Defenseless, and Barbara Hershey and Sam Shepard were the big name actors. What? You’ve never heard of it? Well, that could be because it sucked. But a lot of movies suck, so who knows. You could tell it wasn’t going to be great when it wasn’t released for a couple of years after filming. I guess they were trying to fix it during those years.

Well, it did come out, in 1991, and I went to the premiere and watched myself as background on the screen for 20 seconds or so, after which a friend of mine who was a crew member on the movie leaned over and openly mocked me, “Ooh, look at you, big star! Welcome to Hollywood!” Which was funny – but maybe only if you knew the guy.

Here’s the thing about bands in movies; they are props. They are always props, no matter who the band is. Every band that gets a movie gig thinks that it is their big break, but when is the last time a band became well known after being a prop in a movie? Well, never.

Every time I see a band in a movie since then I shout, “Boom Shaka!” – the name of the band I was a movie star with – and laugh. It’s good for a paycheck, but if your band is offered a movie spot, you might want to ramp down your expectations and look at it as just another gig, because that’s what it is.

But even when you’re a prop in a movie, you will probably want a souvenir, and I’m no different, so recently I went over to Amazon to get a DVD of Defenseless. As it turns out, it’s way out of print, and was only released by some fringe DVD joint in the first place. But it is not exactly in high demand, so I was able to find a new copy for about $5. It arrived yesterday and I popped it in and scanned it for our scene.

The quality of the film transfer was awful – in fact it wasn’t even wide screen, so I suspect it was “mastered” from 3/4″ video. That’s what it looked like. So, fast forward, fast forward, ah, there it is. Blah blah blah, actors talking, blah blah blah…here we come – aaaannnndddd – cut to next scene.

They had cut us out, as if to reinforce our prop status.

I had seen the movie on VHS years ago, and we were in that version, so it was kind of weird that the scene was cut in the DVD. What was this thing, the USA network version? Well, I didn’t need to see myself 19 years younger, sporting a beautiful, all-original 1960 Les Paul Junior that I had to sell for a paltry $700 shortly after filming. Too much nostalgia is bad for the soul anyway.

Success in any creative field is about 846 million times more difficult to achieve than success in normal everyday business. Any monkey who can put in enough college time can get all degreed up and slump into an office somewhere, get their nose nestled comfortably into the right asses and be a “success” in a few short years. In fact, in most industries, the more inept and clueless you are, the better.

But music, art – most of the time you consider yourself successful if you can support yourself at a poverty level without a “normal” job. It’s a bleak road with a few intermittent rewards and bursts of euphoria, but for the most part it is simply difficult. Sound like fun? Then go for it! You know you are on the right track when you are so passionately single minded that you never consider doing anything else.

You’re still not going to get rich (if that is how you measure success), but you’ll have an interesting life. And at the end of the day, that’s much better than success at something you don’t give a damn about.