Well, I don’t know what to say about Wonder Showzen. I recently saw the first five episodes and it’s the funniest thing I’ve seen in a long, long time.

The creators of this absurd violation of all that is good and holy are Vernon Chatman and John Lee, and they have created something that is so very, very wrong, that you should seek it out immediately and consume it with your big green dollars. Or at least Netflix them. 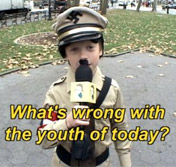 Kids doing “Man on the street” type segments that include things like asking people on Wall street, “Who did you exploit today?” and “When the revolution comes, where will you hide?”

A puppet (an obvious takeoff on Robert Smigel’s Triumph the Insult Comic Dog) trotting alongside joggers asking, “What are you running from?” or going to Harlem to ask people, “What pisses you off?”

Really, really fucked up puppets of all kinds, in fact, including Arab and Jewish letter puppets conspiring to kill each other while two members of the opposing factions fall in love against all the odds and then are shown having puppet-porn sex after which they give birth to a little baby “i.”

Top it all off with songs about slavery featuring kids dancing around over a backdrop of places slaves built, and you’ve got something that I guarantee will make you laugh out loud. Assuming, of course, you have a sense of humor. If you don’t, all bets are off. Not my problem.

Remember kids, as Wonder Showzen teaches us; Danger can be fun, and Imagination can lead to a terrible fate!