Been back out in the ink-hole otherwise known as the garage, where my old letterpress lives, quietly mocking me every day because I don’t print much.

Well, I haven’t been feeling the urge since a house painter came some months ago and washed the house and garage with a high pressure hose, blowing all sorts of water, dirt and mud into the garage through the space under the eaves.

A lot of that water and mud and old dead bugs wound up on my 1890’s letterpress and various tons of related equipment. By the time I found out what had happened, the rust was so depressing I just closed the door and ignored it. Wrote it all off as loss.

But a few weeks ago I got the stupid idea to de-rustify some of the stuff and see if it still had any life in it. A few days and a half a gallon of EVAPO-RUST later, I had the bare workings of the old setup ready to go.

Today I went out to limber up and get back in the grove by printing up a batch of Carol’s business cards. That I was out of practice was evidenced by the crushing of a few numbers of her zip code on a gripper (lead foundry type is relatively hard, but it gives way when it encounters other metal and pressure).

I had no replacements for the 3’s I crushed so I had to reset her phone number and address in a new face. I was surprised to find my hands moving to the correct places in the typecase after being away for so long.

So I knocked off a few hundred cards for her, and set the title for my next project; a broadside poem composed on the spot as I pull the type from the case.

Could be a tremendous and resounding failure, but I’m going to try it anyway. The title is, I WRITE THIS POEM DIRECTLY IN THE STICK and that’s all I’ve done so far. (“THE STICK” being the composing stick, a small metal contraption for holding the lines of type as you set them. you hold the stick in your left hand while you pick up the type with your right. Fascinating, ain’t it?) 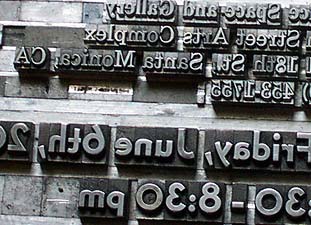 Carol and I are working on another top secret project, and when that’s finished I will (finally) print the book of poems that I promised a couple of years ago. It probably won’t be finished until late summer or fall, but who knows. Maybe I’ll be able to cram some press time in before that.

So yeah, hand made books and broadsides are on the way. They’ll be very small runs and I don’t know what I’m going to do with them yet. Meaning I don’t know if they’ll be for sale or what.

All my copies of alternative man (the Mother Road published book) are gone, and the chapbooks I made in ’99 are all gone too, so maybe some of this hand printed stuff can fill the gap for now. We’ll see if it turns out well or it’s just crap.

And of course (as if it were a surprise) there’s still no sign of Osama bin Laden!