A funny thing happened on November 4th. I voted for a Presidential candidate who won.

I know, a lot of you did, but I’ve voted in every election since 1980, and this is the first time I marked the ballot for the person who actually won. Now I am left with this odd feeling that something is terribly wrong. 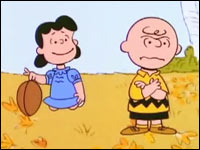 After 24 years of failure you get used to the feeling of defeat, and come to accept it as the way of the world. But every four years I would skip happily into the voting booth like Charlie Brown taking a few steps back to kick the football.

I knew Lucy was going to yank that fucker out from under me at the last second, but I ran forward anyway, full of confidence and anticipation of sweet victory. Or at least a 10 yard squib that my offensive line could recover. Anything. But election after election I was foiled by the forces of political nature.

I should confess that I sincerely do not believe that who the President is makes a bit of difference. Call me cynical, or un-American or socialist, but these guys are all politicians. And at the end of the day, it’s only a certain type of person who becomes a politician.

Kind of like the kind of person who becomes a radio disc jockey. They aren’t really cut out for anything substantial, but they crave the spotlight, so they find a way into a public profession where they can pick up teenage girls off the request line, or out of the volunteer election staff.

So we end up choosing from a group of emotionally damaged narcissists whose primary talent is knowing how to use hairspray, which is all well and good in a farcical, absurd kind of way, but at the very least, let’s be honest about who they are. Okay, Obama doesn’t need hairspray, but that’s just an accident of birth.

So, yeah, since 1980, that’s eight Presidential elections if you’re keeping score. In some of those elections I “threw away” my vote on candidates that I knew full well had no chance of becoming president. If there was a woman or an atheist or an anarchist on the ballot, I usually voted for them.

Speaking of atheists, I have to say that in comparison, electing a black man is no great shakes. Call me when we elect an atheist. Then I’ll agree with you that America has changed. I will gladly admit that I am wrong, and that the voters care about substantial issues when they mark those ballots, and not just popularity, PR or JESUS.

Well, here we are anyway, on the cusp of a great new era, right? I don’t know, man. Ask Jimmy Carter how much fun it is to be president in a post war economy. Assuming these wars ever end, which seems unlikely at this point in history. But if Obama can get us out of Iraq and Afghanistan, expect the economy to slow to (more of) a crawl.

That’s history talking, not me. Look it up. I’m sure Wikipedia has something about that. While you’re there, look up Lenora Fulani. I voted for her for president in 1988 while the rest of you were busy electing G.H.W. Bush. Anyway, the HOPE and CHANGE multitudes will surely turn on Obama the minute government cheese becomes a dietary staple again.

Politics as a hobby does not appeal to me. When people start talking about politics or politicians – voluntarily, mind you! – I look for an exit. To me it’s like talking about the weather, Beat writers or basketball. There’s nothing there.

My world has not changed much throughout the 10, soon to be 11, presidents that have ruled during my lifetime. Wars come and go, economies rise and fall, millionaires become billionaires, and through it all I have to keep working for a wage and paying most of that wage to this place or that place. One bank or another, landlords, governments, women. And I will keep working until the day I drop dead and can’t show up on Monday morning, while Obama’s children enjoy their inheritance on a beach in the Caribbean somewhere.

No sour grapes there. Let the rich have their riches. I am not ambitious or clever enough to join their ranks, or you can bet you ass I would. Then I would write about important things like capital gains taxes and the stock market. No, I prefer this, whatever it is.

So yeah, yippee! America. Like that funky elder statesman George (no relation to Hillary) Clinton said, “Let’s paint the white house black!” At least it’s different. At least it’s something. Something for us all to talk about.