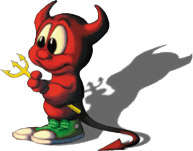 In a move of disappointing and confounding stupidity, recklessness, cowardice and avarice the FreeBSD team has announced a competition to design a new logo/mascot to replace the FreeBSD demon/daemon.

First off, I’m sure 99.9% of you are wondering, “Uh, what the hell is FreeBSD?” Fair enough. It’s a computer operating system, like Windows or Linux. I’m sure you’ve heard of those. It runs on about half the world’s web servers, and even under the hood of your pretty Mac, if you have OS X.

And a daemon is a process that runs in the background on a server, waiting patiently until you need it to fix the horrible mistake you’ve just made, or to remember to do something that you’ve completely forgotten.

Anyway, that stupid little daemon cartoon is known worldwide as the FreeBSD logo, and changing it now is one of the most bone-headed moves I’ve ever seen. Especially considering they are doing it in order to avoid offending bible nuts.Jun Kuriyama of the FreeBSD Core Team wrote:

Historically, the FreeBSD Project have used a characterized daemon as a mascot, and displayed it on our web site with the text “FreeBSD” as our logo. This character sometimes treated with misinterpreted in the religious and cultural context. And this daemon character seems cute from somebody’s point of view, but somebody may think which does not suit for the professional products to indicate that are using the FreeBSD inside.

Which – if I may presume to interpret his broken English – means, “We don’t think we can sell shit with a devil on it to you flag-waving American bible freaks.”

And I can’t blame them for that kind of thinking, but it is sad and troubling, along with the ten thousand other examples of the crown of thorns and rugged cross brigades whacking their limp noodles across anything even slightly salacious or suggestive in American mass media/culture and rendering it neutered and therefore fit for consumption by anyone from infants to septuagenarians.

The only problem with that, of course, is anything that’s suitable for everyone isn’t really suitable for anyone, and is just another spoonful of dead weight and empty calories added to the tons of fluffy goodness that already bury us.

Ah, so, here we go again. Take away the little daemon FreeBSD, who cares. Replace it with something rad like a puppy or a cross or a picture of a Catholic priest with a little boy’s dick in his mouth. Glory be, and Jesus loves the Stooges!