I’m in the midst of a seemingly never ending task. A place I often find myself.

What makes my feeble mind encounter a ridiculous mound of sorting, scanning, building, fixing and otherwise general tedium and say, “There’s a great use of your time!”

If this stuff was really important, wouldn’t someone else have done it already?

But that’s probably the thing, right there. If I don’t do some of these things, no one will. That doesn’t make them important, in and of themselves, but it makes them necessary.

And since I’m me and not you, I guess there’s not much I can do about any of this. 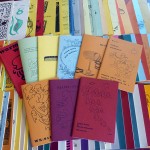 So for the record, the latest never ending task I’m working on is scanning the Bukowski poems in a hundred different issues of The Wormwood Review, a literary magazine that began in the 60s and ended in the 90s. An impressive run for a seat-of-the-pants operation like Wormwood.

When I’m finished with this I’ll have a handy, space age pdf archive of a very important element of Bukowski’s career. And it will be really cool for me and the few people I share it with. But it will have been a task that was utterly unnecessary in the scheme of things. Not a waste of time, exactly, but…maybe.

Funny thing about Wormwood; the publisher, Marvin Malone, went through a period where he would substitute oronyms for the name of the magazine. What that means is instead of the cover saying Wormwood Review, it would say The Worm Would Reave You, or The Whale Would Wreck You, or the title of this article.

I find that to be one of the most punk rock moves in the history of publishing. Think about it, you’ve dedicated a good chunk of your adult like to producing a poetry magazine of all things, and for a couple of years there, every quarter when a new issue comes out, it has some fucked up sound-alike title that your readers may or may not recognize.

That’s astounding and ballsy and the sign of a true rebel. So here’s to the late, great Marvin Malone and his Worn World Raw View.