A couple of compilations try to catch every track, but both fail, so you end up buying more than 20 CDs on three different compilation series to get all the known recordings from the 1967 – 1972 period. Even if you take away the duplicated tracks, it’s a shitload of music. 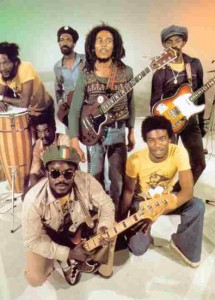 A little clarification here: I use “The Wailers” to mean all the versions of the group that Bob Marley recorded and toured with. In the early days, from 1964 through 1973 or so, The Wailers were Bob, Peter Tosh and Bunny Wailer. After the first two Island albums, Catch a Fire and Burnin’, Tosh and Bunny left, and Bob continued on with a rotating cast of musicians. Some people consider The Wailers to have ended when Peter and Bunny split, though Bob continued to use the name.

For me, if Bob was on stage or in the studio, it was The Wailers. And he felt the same way. But despite the cast of literally hundreds of musicians that played on Wailers tracks, two people were almost always on stage and in the studio with Bob, and they were Aston “Family Man” Barrett (bass) and Carlton “Carly” Barrett (drums), the Wailers rhythm section.

In the summer of 1969 The Wailers had been recording and performing for five years, and while they had success in Jamaica, they were in a bit of a creative slump. The Barrett brothers were self-taught musicians who, through hard work and innate talent, became the top session players in Jamaica.

They played on hundreds of records and had a successful performing band called the Hippy Boys. At the time, the Barretts were riding a much higher wave than The Wailers, making more money and enjoying more fame. But through a series of fortuitous events, the Barretts and The Wailers joined forces that summer, and Family Man, Carly and Bob would be the constants in The Wailers lineup right up to Bob’s death in 1981. 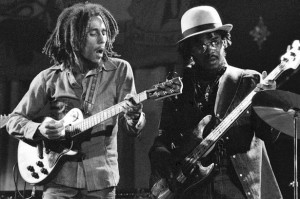 I say all this to let you know that the Bob Marley music that you know was shaped, and in many cases created, by the Barrett brothers. Bob Marley was a marginal musician at best. A great songwriter, yes, but he didn’t even know how to play the guitar when The Wailers formed, not until Tosh taught him a few simple chords.

Later, Family Man would teach him a little more on the guitar, but it was generally known and accepted that Marley was the songwriter and Fams was the musical architect. He is the person most responsible for the Bob Marley and The Wailers sound, both in the studio and live. It is not an exaggeration to suggest that without Family Man, Bob Marley may not have become BOB MARLEY.

Now The Wailers didn’t start making a lot of money until 1978 or so, and all of their band business was conducted and based on verbal agreements. There was a lot of legal bullshit involved from the time they signed with Island up until (and well after) Marley’s death, but the group always had the same arrangement; half the money went to Bob, and the other half went to Fams, who split it among the musicians.

Consequently, during Marley’s life his band was always very well paid. Unfortunately for Family Man though, he never secured any contracts with Island or with Bob (not that Bob would have ever entered into a contract with a band member anyway – he generally distrusted that kind of paperwork and preferred to operate on trust and Rastafarian ideals of justice and equality). So to Fams’ mind he was being paid royalties all those years, but in fact, he received writing credit on only a few songs, and was basically being paid as a hired musician. 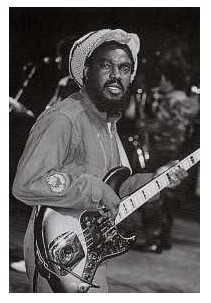 That would have been fine for most of the other Wailers, but not for Fams. Not for the man who created the sound that Marley rode to worldwide fame. He should have been officially and contractually cut in on the Island and other deals, but he never was.

Part of that is his fault (all of those guys were notorious for not reading legal papers that were sent to them and consequently they never signed many things that needed to be signed), part of it is Bob’s fault at the time, but in the long run, all the ugly bullshit that happened after his death is directly Bob’s fault, because he neglected to write a will.

Marley was not tight with a dollar, as his arrangement with his band shows. He cared very little about money, and only valued it for its effectiveness in helping advance the message of Rastafari. In fact, he gave away staggering sums of cash. Once he began to make serious amounts of money, every Friday was “pay day,” and struggling people from all over Jamaica would line up at his house on Hope Road and tell him why they needed some cash – leaky roof, hungry belly, toothache, kids need shoes – you name it.

Marley’s accountant during the last years of his life said that Bob gave away roughly a quarter of a million dollars a month in relatively small amounts to anyone who needed it or asked for it. So it would seem obvious that he never intended to screw Fams out of any money he had coming to him, but that’s exactly what happened.

Bob would be really fucking furious if he could see what his legacy has been reduced to today. The destitute musicians. The endless repackaging of the same couple of dozen songs. The tsunami of trinkets and worthless bullshit. Rita and the kids have tacked Bob’s name onto every item known to man that can be sold for cold, hard cash. This was not Bob’s mission. This was not his vision. And Family Man’s story is just one ugly, horrible, aching, infuriating part of the whole disgrace.