You probably know a guitar player. They are everywhere, like ants or citrus fungus. You can’t stretch your legs without kicking a guitar player. If that guitar player plays an electric guitar, odds are they have at least one effects pedal (and if they have one they probably have half a dozen). Guitarists call these effects stomp boxes, because they sit on the floor and you, well, stomp on them to turn them on and off.

The first stomp box was a tremolo unit made by DeArmond in the 1940s(!), an effect that makes the guitar sound seem to wobble or vibrate. That was enough to blow people’s minds for a couple of decades, but eventually the market was flooded with more. A lot more. Wah pedals, fuzz boxes, boosters, delays – a veritable avalanche of different things to change the sound of the guitar. These things sprouted up because guitar players apparently can’t stand the naked sound of their instruments.

Okay, that’s not exactly true. The effects were created because musicians are a strange lot, always in search of some sort of new sound, always looking for a way to stand out and make their audience say, “Whoa, what the hell is that?”

In the early days of effect pedals, there were only a few things available. Tremolo, wah, reverb and different forms of distortion or fuzz. Those sounds ruled the roost in the 60s, so much so that tremolo and reverb were built in to a lot of the amplifiers of the era. Many different companies made each of the devices, so you could see essentially the same wah pedal from Vox, Colorsound, Marshall, Crybaby, and half a dozen weird little short-lived brands.

In the 70s a new generation of modulation effects came onto the scene. Things like choruses, phasers and flangers. The 80s brought digital technology, but not much in the way of further sound manipulation. Mainly because the early analog stuff pretty much covered everything you can do to the sound of a guitar, short of making it sound like something that isn’t a guitar.

The ugly rise of the boutique

So while there were a lot of brand names in the very early days of the effects manufacturing business, over time the field came to be dominated by a small handful of companies. For that reason, when you heard a guitarist assaulting you with some new sound, you could look at his pedal set up know immediately who made the box. In fact you could see a picture of a guitarist’s set up and just by knowing a few basic shapes and colors, you could pretty much name everything they were using.

Then came the Internet, as it always does. The ability to sell a product directly to a customer changed a lot of industries, but it really changed the effect pedal market.

If you look around now there are dozens of small pedal makers, and hundreds – or perhaps thousands – of effects available. Of course they all need to distinguish themselves somehow visually, so they all have different designs and configurations, with some pedal makers even slightly varying the visual design of a single pedal every time they make one.

As a result of all of that creativity, you can look at someone’s pedal board now and not have any idea what any of their shit is. I’m guilty of it myself, since I built a few of the pedals I use and finished them in obscure ways that don’t tell you anything about what the box does. 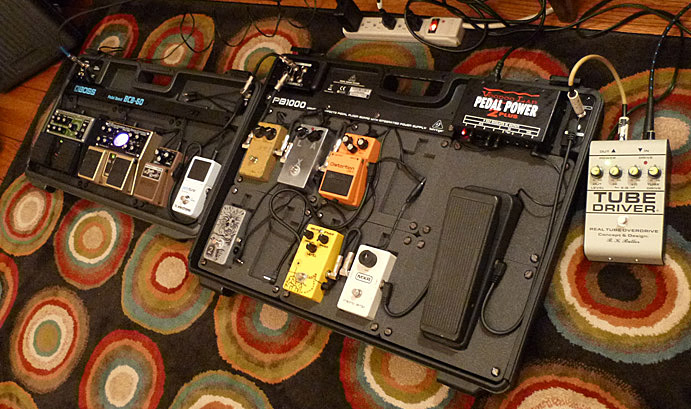 The yellow one there, for example, is an envelope filter (an “auto wah”) that features a drawing of a bunch of ants walking onto a plant. Unless I told you what it did, you’d have no way of knowing. Still, aside from the few boxes I built, any random guitar player off the street could likely identify everything else I’m using.

The funny thing about all of this, and the thing that made me want to write this article that is boring the pants off of you right now, is that of all of the hundreds of “boutique” pedals out there today, all of them do the same four or five things. And most of them are built around circuits that were developed in the 60s and 70s.

Look at this fancy pedal board, for example:

Looks like you could fly the space shuttle with this fucker, doesn’t it. But you know what all of that stuff is? Overdrive, fuzz, delay, reverb, chorus, flanger.

But it sure looks cool. And as an added bonus, each one of those boutique versions of the old classics costs more than the old classic itself! Winning!

It’s all more than a little ridiculous, since you can still get your grubby little picking fingers on the original pedals that do the same thing (and usually do it better) thanks to our pal the Internet.

But for some reason a lot of people who are drawn to the guitar are also tinkerers, and a lot of tinkerers like to “improve” things once they figure out how they work. Which is why there are forums full of people talking about how much better their amplifier sounds since they put in different tubes or replaced all of the capacitors with gilded fruit fly wings.

That’s all well and good, and cool even. That’s how advances are made and things are shaken up. I just wish some of these basement pedal builders – I’m sorry, boutique pedal builders – would put as much energy into creating something new as they do into building yet another Tube Screamer-based overdrive, putting it into a different colored box and calling it a day.

I guess what it boils down to is it’s pretty easy to solder up an overdrive, but it’s a lot more challenging to design and build something like a ring modulator (now that thing sounds insane).

But maybe something will come out of one of those basements one day that makes everyone stand up and say, “whoa!”

And that will be cool.