The Z channel was one of the first pay cable stations in the country, airing interesting films around the clock. Obscure, weird films, director’s cuts, foreign films that no one in America could see.

Z was only available in a small area of west Los Angeles, but the area was/is full of entertainment industry types, and they all watched, which made the channel, and the guy who started it – Jerry Harvey – very influential.

In addition to being an influential, obsessive movie geek (interviewer: “Are you interested in anything else in life besides film?” Jerry: “What do you mean?”), Harvey was also profoundly depressed, and ended up murdering his wife and committing suicide in 1988. Less than a year later Z was off the air.

Z Channel: Magnificent Obsession was directed by Xan Cassavetes (daughter of John Cassavetes and Gena Rowlands), and it’s extremely watchable and entertaining, even if you think the subject might not be up your alley. Very well researched and put together.

I always wonder where the hell a director starts on these oral history type documentaries, especially when so many on-camera interviews are involved. What a nightmare it must be cutting something like that together, let alone making it compelling to watch. Nice work. 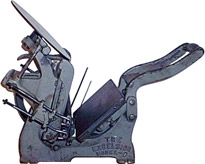 In other news, the letterpress poem is finished. The printing, anyway. I still have to cut them and see if I like the result.

I already see one way it could have been better, and I definitely chose the wrong (difficult) paper to print it on, but through a lot of tweaking and working and over-inking I got the 50 off the press. I’ll probably make 30 or 40 of the copies available here sometime soon, with a special added gimmick – er, I mean bonus.

The poem itself turned out well. It surprises me that it is similar to all the poems I write in rhythm, flow, wrap-up…even though the process was almost unconscious, as it wasn’t possible to go back and read one part in order to build on it, and the next line wasn’t thought out in advance of picking up the type.

Overall an interesting experiment. One I’ll never do again. The one-of-a-kind nature of it is what makes it appealing, to me anyway, and the fact that it’s only going to be published on these 50 cards. Not putting it in the poems database or sending it off for anyone else to publish.

Weird, interesting, just like the Z channel, only without the murder/suicide.